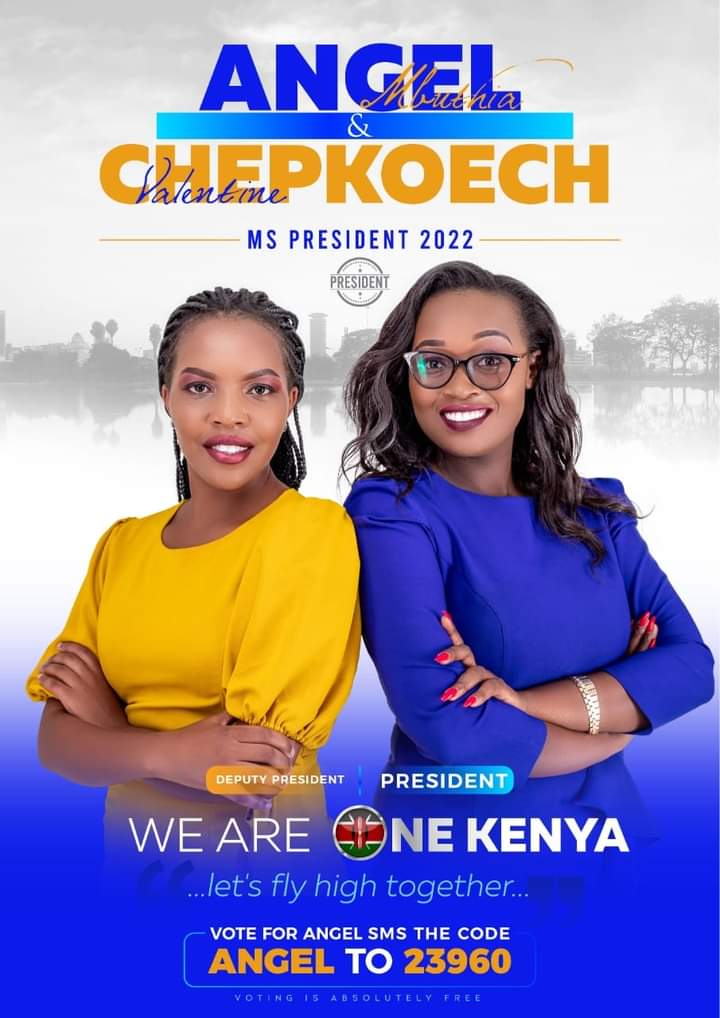 From the Bottom, Breaking Glass Ceilings on the Way Up

The sensational picture of Miss President Contestant Angel Mbuthia and her running mate Ms Valentine Chepkoech clad in the diametric opposite colors and ideals of our political sphere has provoked debate across the country.

The blue and yellow dressing is a fusion of the centre – left and centre – right ideologies and unity of purpose in rallying a people towards national development.

Angel Mbuthia is a gem in the socio – political arena, having sprouted from campus politics to the mainstream political space and with an impeccable grasp of geopolitics.

Her story is a living example of a journey of a thousand miles, which began from the bottom in Kabete and is not yet to end any soon, if her mountain of ambitions is anything to gauge from.

From the village, to a trailblazing female student unionist not only in the country, but covering the continental territory as the Secretary for Gender in the All Africa Students Council.

Locally, she presents youth interests at the National Youth Council Board and she also serves at the COMESA Youth Advisory Panel. She has a visibly rare gift of the gab and a deep borehole of depth in matters political economy, public policy and accounting.

Her skills, values and abilities are the key spices that ingratiate her to several young people who look up to her from across the political divide. That admiration transcends the narrow confines of tribes, age and other social inhibitors ailing our country.

Ms. Mbuthia epitomizes boldness, courage and unmatched valor. Recently, she applied for the position of Chief Adminstrative Secretary to give her an extra platform to champion her beliefs by exploiting her capabilities in nation building.

To vote for her in the ongoing Miss President Contest, you are just required to send the text ANGEL to 23960 at no cost.

She is competing against five other contestants who made it to the finals. The voting ends on Thursday.